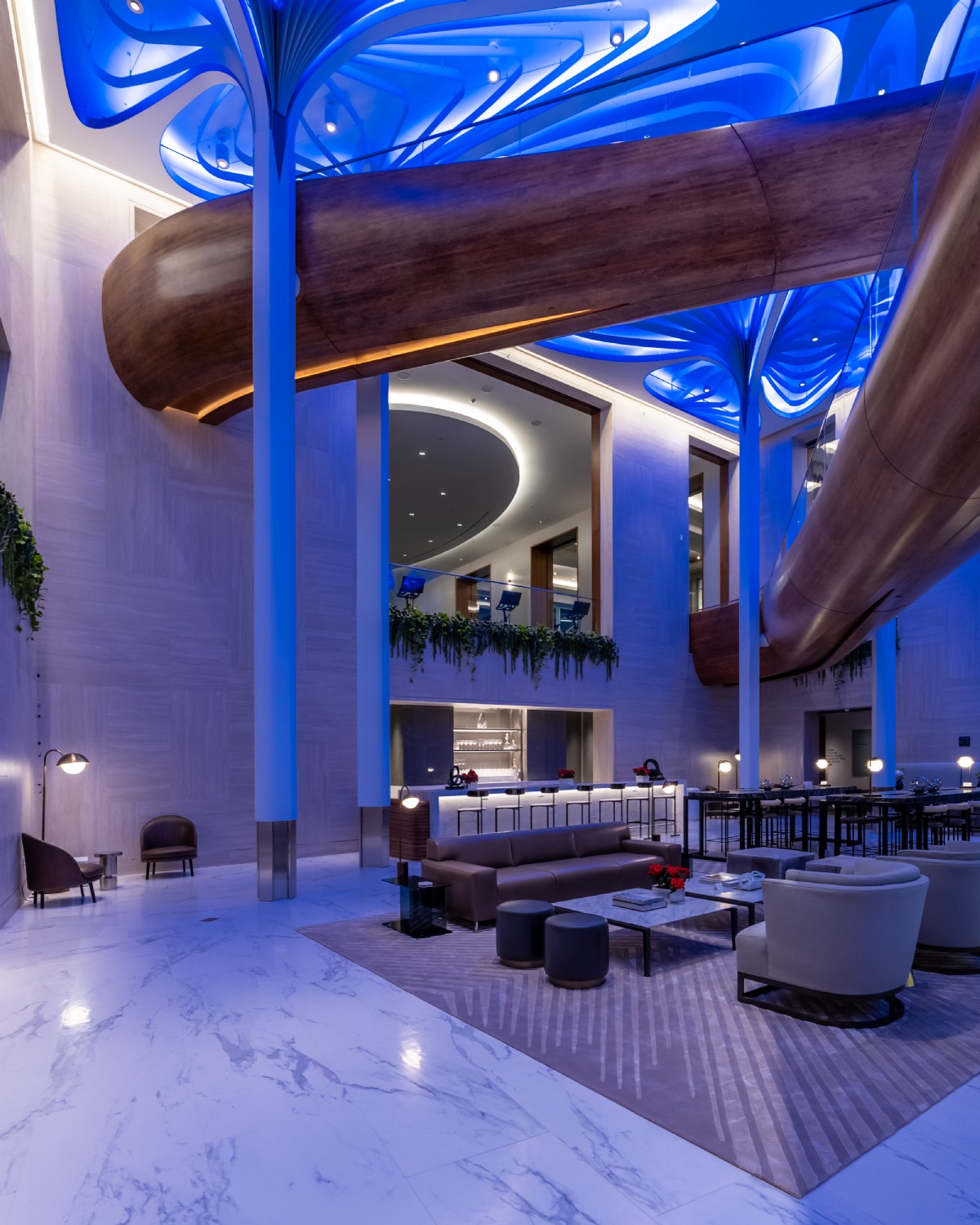 Can a space that’s completely underground be called an atrium?
Masterful lighting says yes, it can.

At the heart of the sprawling Waterline Club lies the grandiose Nexus atrium – the club's central gathering space with bar and lounge areas for work, repose, and entertainment. Towering at thirty feet, the Nexus offers direct access and sightlines to the 30 curated amenities spaces within. Stephanie Daigle and her team at Focus Lighting approached their lighting design by creating an environment that exudes open airiness by day and intimacy by night.

The lighting integrated into the undulating architecture was calibrated to follow a natural circadian cycle. The bright, cool glow of midday fades into lower, warmer tones as dusk approaches. At that point, accent LED lighting found in different focal areas throughout the space – including an amber LED strip on the underside of the wooden circulation paths - illuminates the environment, creating cozy nooks and wayfinding sightlines.

"Having lighting that wasn't just coming from 30 feet above, that was integrated into the elements at the lowest level, is what really helped it feel comfortable and human-scaled," Stephanie explained.

Nexus has numerous settings at the lowest level for guests, including a lounge, bar, and a stage for entertainment. Focus integrated Q-Tran's low wattage linear LED strip within an aluminum extrusion into the bar fascia to edge light the glass shelving, supplying both up and downlight.

The space, which was designed by Rockwell Group, also features three levels of tall "window views" into the amenity spaces that overlook the atrium, each with cove lighting that spills into the hub and reinforces the feeling of openness.

Focus chose a mixture of well-blended lighting elements to provide continuity and unity as one travels through the spaces. "You can stand at one end of the pool - see across the entire property - into the far end of the basketball court. So, we needed products that could be applied in multiple different ways to unify the diversified spaces with light."

Stephanie informed that she used similar Q-Tran products across the Waterline lighting scheme to maintain the cohesive design: "It's really nice to be able to use a 1.5 watt LED tape light instead of a 3, or a 4 watt and still have that consistency of color temperature. If I need something a bit brighter, I can use a brighter Q-Tran tape in one area and pair it with a lower wattage tape elsewhere and be confident in knowing they're going to perform similarly, which is great".

Do you have professional pictures of a project that used Q-Tran architectural LED lighting products? If so, we’d love to hear about it and feature you. Contact marketing@q-tran.com.