White is white, right?  Not when it comes to LEDs, paint options at Lowes, or wedding dresses. Fortunately for you my expertise doesn't come anywhere near the realm of wedding dresses. And as far as painting goes, more ends up on my clothes than on the walls. So I'll focus on LEDs for now.

LED Technology Is The Baseline For Architectural Lighting Design

Within the last ten years, we as a design community have moved quickly into utilizing LED technology as the baseline for architectural lighting design. No longer is the spec written around T8 lamps or tungsten halogen track heads or even 2 x 2's with U-Bend bulbs. To see any of those lamp types on a fixture schedule would certainly be a bit nostalgic.

But of what general illumination and the white light we expect in an office or classroom or even a living room? With the constant improvements of LED efficiency and electronics along with the creative minds of scientists and engineers, the choices for white LED strips vary, to say the least.

The Perception of White LEDs Can Be Controlled In a Manner That Mimic Incandescent or Color-Changing Sources.

Related terms for white LEDs arranged in a way to be controlled or perceived in a manner that mimic either incandescent sources or color-changing sources are known as:

A bright classroom might have a single zone of illumination comprised of fluorescent fixtures that were previously written out in a spec as: F32T8/SPX35/ECO - which now can be replaced with any number of 3500K LED fixtures.

Dynamic, as opposed to Static, indicates that the white color can be changed. A tungsten halogen A19 light bulb might now be specified with Dynamic White LEDs. It takes those correlated color temperatures and manipulates them in a way that can either change color across the color temperature range when controlled, or mimic the dimming of an incandescent source - where the white light warms as it fades out. 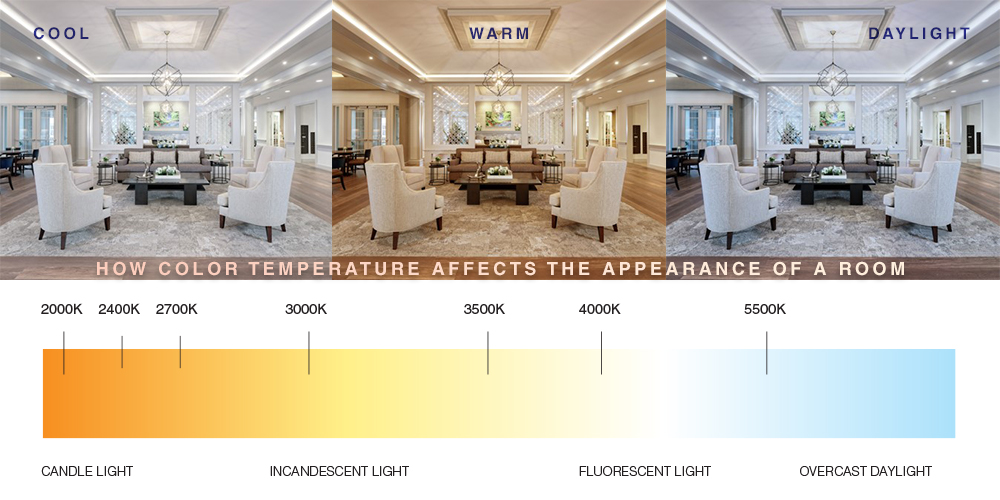 Dimming an LED Diminishes Its Brightness Without Impacting The Perceived Color.

When dimmed, an incandescent bulb ranges in color temperature from its initial 2700K or 3000K down to an amber hue in the 2200K range because the electrical current applied to the tungsten filament is changing.

At the low end of the dimming range, the warmer colors are a clear indicator of the dimming curve and fade. LEDs do not dim in the same way since there are no tungsten filaments reacting with gas-filled envelopes that ultimately produce the light.

By either adding different colored LED chips to a strip or linear fixture, or manipulating the current or voltage, LEDs can appear to change from a static condition to a dynamic one.

The many opportunities for us lie within the individual project's priorities and design team. Here at Q-Tran, we are proud to offer architectural LED lighting solutions that consistently deliver whatever version of white your project is looking for. As long as it's not a wedding dress. We don't have any of those.

As a former lighting designer with a project history ranging from illuminating performance art to high-end residential lighting design, Maura brings her eye for detail and design as well as a wealth of industry knowledge to the Q-Tran team.  The breadth of her previous professional experiences contributes to her ability to assist our valuable clients.  Reach out directly or come visit her at the factory; she loves to entertain and give tours of our amazing facility.