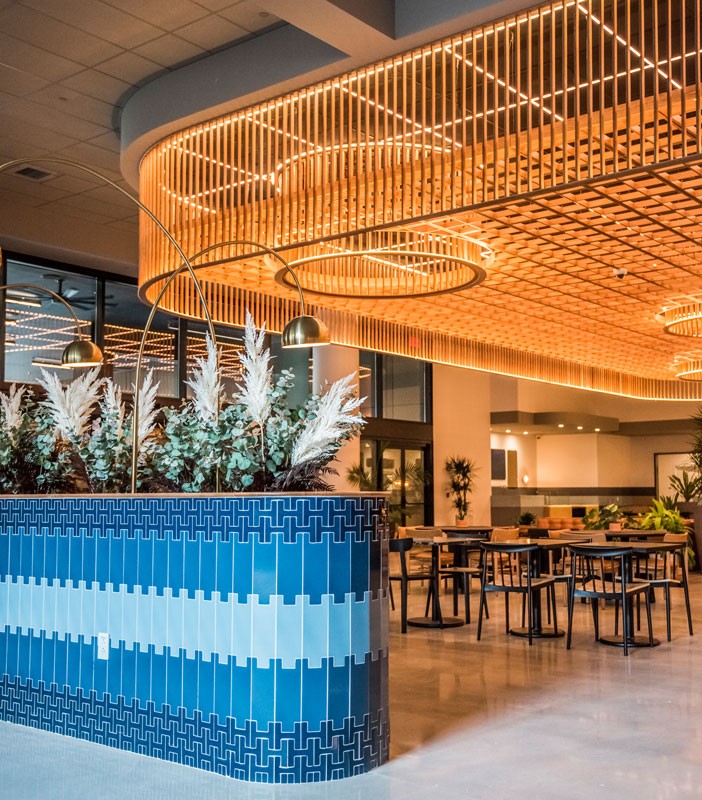 Politan Row at Colony Square is no ordinary food hall. Built in the 1960’s, the space originally housed a mall-style food court with a convertible ice-skating rink. The development has since evolved into a reimagined dining experience for Atlanta’s urban community.

Megan Bell and Lindsay Butler of Bell-Butler Design & Architecture, a woman-owned architectural firm specializing in commercial and hospitality design, teamed up with Chicago-based lighting designer and founder of Rachel Levy Designs, Rachel Levy. Their goal was to capture the essence of the architecture in the neighborhood while cultivating a dynamic atmosphere that utilized lighting to complement the functions that take place in the venue, ranging from breakfast into evening cocktail hours.

"The design is referential to the history of Colony Square. The space originally had a large trellis spanning over the ice rink and food courts with integrated skylights, so that original structure was what inspired this lit ceiling feature", Lindsay Butler detailed.

The team achieved the melding of historical design with modern functionality through blending programmable linear LED lighting throughout the wood slat ceiling. The warm tones of the wood and light both utilize a mix of horizontal lines and mid-century modern curves to create an ethereal ambiance.

A column of wood highlighted by KURV flexible fixtures descends from the striking grid of linear LED fixtures in the ceiling, serving as a dramatic central meeting place dubbed Bar Politan.

"I like using Q-Tran products for my curved applications. I am always looking for a curved LED fixture that throws light far instead of creating a blob of light, and Q-Tran has been the best I've found," Rachel shared.

Known for her multi-layered lighting and sophisticated control systems, Rachel mixed a variety of warm color temperatures in static static white LED strips, ranging from 2400K-3000K, to pair with dimmable QZ and IQ-PH DC power supplies. This allowed the space to transition through a programmed series of daytime and nighttime lighting.

Rachel details her programming methodology within the space, stating: "During the day, we emphasized a more unified linear grid of light in the ceiling structure, whereas when we transitioned into night, the grids of light were dimmed so that emphasis was drawn to the warmer glow of the perimeter shapes to achieve the intimate candlelit setting."

Smooth dimming was an integral component of the lighting design, and one of the main reasons Q-Tran LEDs were specified. Lindsay and Rachel both commented on Q-Tran's seamless dimming capabilities and range of color temperature offerings compared to other products. "It seems as though the advertised range is different from what you get. The dimming from Q-Tran is a lot better than other LED manufacturer's products I've come across; It works seamlessly and with better range."

"Q-Tran is one of my go-to LED tape manufacturers because I know they are of high quality, withstand time, and ultimately look a lot better and save money in the long run", Rachel explained.

Do you have professional pictures of a project that used Q-Tran architectural LED lighting products? If so, we’d love to hear about it and feature you. Contact marketing@q-tran.com.